Germono Toussaint, a TFTT founding producer and playwright, is currently on staff at the world famous Apollo Theater. Germono has curated the January 2018 installment of Live At The Apollo Music Cafe featuring vocalist Crystal Monee Hall, who has appeared on Broadway and other venues. Germono took a few minutes to tell us about the event and you can find out about his other upcoming projects.

Tell us about your position at the Apollo Theater.
I’m currently the Manager of Individual Giving at the Apollo Theater. I manage a very large portfolio of individual donors, including the Apollo Young Patrons, which is the Theater’s young professionals group. One of my main goals is to rebrand and refreshen the way we present the Apollo to donors. I’ve also had the opportunity to create epic cultivation events, like our east Harlem rooftop party and concert.

How did the opportunity to curate the upcoming Live At the Apollo Music Cafe featuring Crystal Monee Hall come about?
I wanted to introduce the programming staff at the Apollo to Crystal who I’ve worked with for over 10 years. I invited Jamilla Deria, the director of programming, to one of Crystal’s shows and she was blown away. Crystal was booked right away. The vision for the show grew beyond just a concert, to a social justice themed multimedia experience.

Among the songs that Crystal is scheduled to perform during the concert include Grand Master Flashes "The Message," and Marvin Gaye's "What's Going On?" What inspired the selections of this song and why are they relevant to the times in which we are living?
Crystal wanted to use music and visual imagery to show the audience the different stages she went through emotionally when trying to come to terms with the many innocent black men and women that have been slain. The audience will really be taken on an intense, emotional, but hope-filled journey.

If you could curate other programming at the Apollo what would it be?
Of course I would love to bring more of my friends to the Apollo stage. I know so many extremely talented artists that just need a platform. I would also love to bring in programming that caters to the large black, gay, population in Harlem.

If you are developing new plays of your own, can you give us a sneak peak about the various projects you are working on? And, do you have any plans on sharing them with the the public in their developmental stages (such as in readings)?
I just finished a play inspired by an older relative who struggled for decades, unsuccessfully, to get into the music industry. It’ll be read at the National Black Theatre as part of their "Keep Soul Alive Reading" series on April 24th. I’m also doing research for a new musical theater piece based on the concept of the Gatekeepers written about by West African author and Shaman Malidoma Patrice Somé. 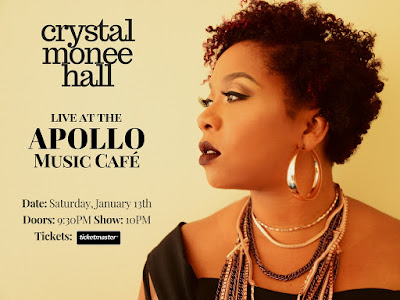 Purchase tickets for Crystal Monee Hall's Live At The Apollo Music Cafe here.
Posted by Unknown at 7:17 AM 1 comment: